When Tania Schmieder contacted me with a note of appreciation for ‘the awakened eye’ website there was no mention of her wishing to be included on the site.  But she had left a cybertrail; I followed it to her paintings, which in turn delivered me to an uncommon depth of silence.  She had come upon the site while seeking out the writing of Frederick Franck, and said that his books had been a great inspiration for her.  Readers here know that Franck was a profoundly important teacher for me; the site takes its name from his 1979 book, The Awakened Eye.  It was clear that Tania’s work would be a perfect fit for the artisans’ gallery.  An invitation was offered, et voila! 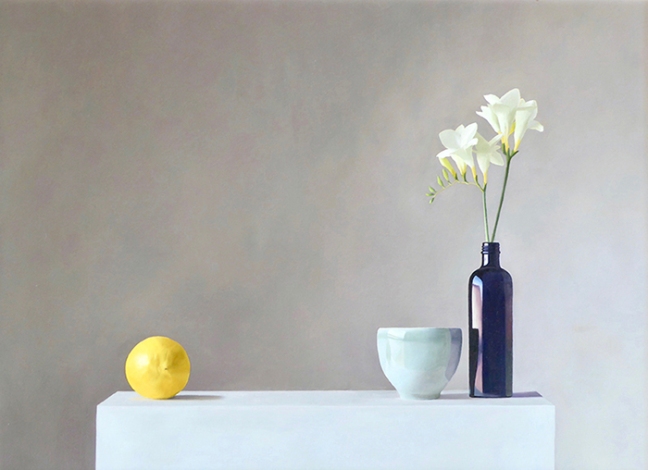 Tania is quiet about her work.  Currently, she has no website, although you can see her work at a few online links included on her page.  There’s no big sell, no complicated concepts about what she’s saying, no long lists of exhibitions, publications and/or awards.  Her works are similarly quiet, yet their potency is undeniable.

Born in Kenya, Tania grew up in Brunei and has travelled widely. She graduated from Edinburgh Medical School in 2006, but after a year working as a junior doctor realised she would never thrive in the medical environment.

She is now thriving as a self-taught artist, working at her home in Freiburg, Germany.

It was in England that Tania experienced an interaction with a still-life painting that “brought her to her knees” and made her take up painting seriously.  Hearing this made me think of Albert Camus’ observation:

A man’s work is nothing but this slow trek to rediscover, through the detours of art, those two or three great and simple images in whose presence his heart first opened.

The blessedness Tania experienced when her heart opened in front of that “great and simple image” is her companion as she draws and paints, and the possibility that her work might invite the same blessing for someone else provides its meaning for her.

The ability to take an ordinary everyday vessel and re-enchant it to our eyes; to capture and suspend the transient beauty of a flower, plant or fruit in timelessness; to gently guide us towards a tranquil, simple suchness that cannot be wordified – this is Tania’s genius.

The purpose of ‘looking’ is to survive, to cope, to manipulate …
this we are trained to do from our first day.

When, on the other hand, I SEE, suddenly I am all eyes,
I forget this ME, am liberated from it and dive into the reality that confronts me.

The artist who SEES thus, and whose expression can also help others “dive into the reality” and experience its immanent immensity, is a blessing to us all.

Giorgio Morandi described himself as “essentially a painter of the kind of still life composition that communicates a sense of tranquillity and privacy, moods I have always valued above all else.”

In her quiet and modest way, Tania Schmieder exemplifies the same values.  Same species: rare, and increasingly endangered in the frantic overwhelm of an image-driven digital world.

Tania Schmieder at the artisans’ gallery

at the artisans’ gallery

the 10 commandments (guidelines for the creative life)

the Face of faces

the way of nen

This is the first time I’ve been brave enough to ask directly:

If your work has been freely featured on the site,
whether by invitation or submission,
or if, as a reader,
you’ve found the site’s content helpful,

(A deep bow to those of you who didn’t need to be asked.)