I’ve been wondering lately how to better share the rich resource of information hiding on pages in this site. For its first decade, the awakened eye was a self-hosted website, and it seems that the content enjoyed much higher page rankings then than it does now, hosted (freely) on WordPress. I have come to understand that blog posts, being interactive, tickle the toes of the search engines in ways that static pages do not.

My new plan is to present much of the material published on static pages, as posts. These will not simply be replicated pages; they will link to the original pages but/and also contain fresh material. I hope this strategy works to introduce both old and new subscribers to more information that may be of interest, and that it throws a hook to the robots so that the artisans and writers who have contributed to the site will feature more prominently in search results.

Usually when a new artisan is added to the artisans’ gallery, a blog post is published to introduce them and their work. However there are a few who were added years ago when the site made its quiet entry into online orbit, who missed out. Let’s start with them.

Made, invented – it is not the image experienced in life, but in another reality. – VC

Influenced by Ad Reinhardt’s Twelve Rules for a New Academy 1953, Celmins started to consciously strip away elements in her art and rejected gesture and composing. Returning again and again to ocean views, lunar surfaces and star fields she depicts vast expanses and creates depth through her investigation of the image and her chosen material. Most of her images are painted or drawn very close to the edge of the surface she is working on and seem to extend beyond the canvas and into the space occupied by the viewer.

The focal point is the small compressed image in front of you; the illusion of space from the image stays on it. As the artist describes it, the image is ‘pinned down, in your mind it wants to expand out. Reality (the art) makes it stay where it is on the wall.’

As I was working with the pencil, I got into some of the qualities of the pencil itself. That’s how the galaxies developed.

Although Celmins has been associated with several art movements during her career she seems always to have operated outside the dominant trends of the day. The rigour and the intuitive nature of her process has restricted the volume of her creative output and in turn limited displays of her work. Celmins works at her own pace and has likened herself to the spider for its precise and industrious constructions.

Maybe I identify with the spider. I’m the kind of person who works on something forever and then works on the same image again the next day. 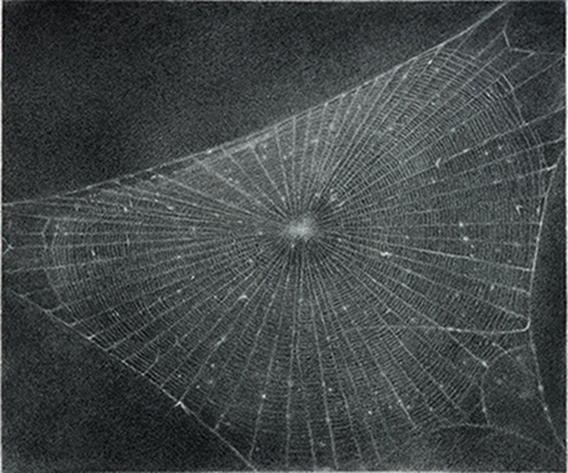 Tedious [work] for some; for me it’s kinda like being there.

For Celmins a work of art doesn’t represent anything but itself. Through the photographic source material of oceans, night skies and deserts she relentlessly explores the image and the richness of its variation. As subjects they are united by their depiction of boundless nature and suggestion of the infinite.

I’m not a very confessional artist, you know. I don’t ever reveal what I’m feeling in my work, or what I think about the President. I use nature. I use found images.

In Celmins’ work however, the subject matter is secondary – her primary interest is that of making.

Sometimes I’m convinced that there is nothing else but the physical act of making the art.

The reason I think I do images that require so much time is that I feel the physical work itself lets some other thing that came through, letting something unconsciously seep through, some subtlety that my brain was not capable of figuring out…

I do like kind of impossible images. I mean images that are hard to pin down. That aren’t like a tabletop and an apple, but images that are really almost like mind images. Images that are space but they’re hard to grasp. But then they’re very graspable here, I mean, I make them accessible through another way, through manipulating the paint.

And from the video, a comment that will strike deep into the heart of those engaged in a contemplative art practice:

I really do like a lot of solitude. It’s impossible to do anything without it.

Only in time; but that
which is only living

Can only die. Words,
after speech, reach

Into the silence. Only
by the form, the
pattern,

Can words or music
reach

The stillness, as a
Chinese jar still

Moves perpetually in its
stillness.

If a good painting comes off, it has a stillness,
it has a perfection, and that’s as great as anything
that a musician or a poet can do.
– Jeffrey Smart

Jeffrey Smart liked to compare himself to an old carpenter working away at his bench, an image that may seem surprisingly humble to those who knew him as an ebullient, witty and outspoken man. But he understood as well as Proust that the man and the artist are different beings; that the man can be garrulous, hilariously silly and take pleasure in superficial distractions, but the artist operates at another level, descending to a solitary and silent depth where the work of the imagination unfolds.

Those who have been to the house near Arezzo in Tuscany know that the short walk across the courtyard to the studio represented this transition from one world to another, from extroversion to introversion, from banter to concentration. “I have to go and paint a whore by the roadside now,” he observed to me as he took his leave from the conversation to resume his meditative labour.

It must have been this that Jeffrey missed most in the past year or two of reduced mobility, for the vocation of an artist is not one from which you can retire; the work at the easel is life itself.

Smart was a great Australian painter, but he was also an example and role model of how to be a great painter. The first lesson he offers us is the absolute necessity of following one’s instinct for what seems true and important, and not allowing oneself to be drawn by fashion into the vacuous and the derivative. The second is to find a subject substantial enough to sustain one’s interest across time, and to allow for development in depth without mere repetition. And the third is to evolve a working method that allows one to progress towards the realisation of inspiration in concrete form, to turn ideas and intuitions into pictures; and this where we must admire the devoted, stubborn, daily work of the old carpenter at his bench.

This page has links that will be of interest to those who would like more info on Jeffrey Smart and his work.