the shape of our perceptions

To be an artist is not a matter of making paintings or objects at all. What we are really dealing with is our state of consciousness and the shape of our perceptions.

In a way it’s a simple thing. For the next week try the best you can to pay attention to sounds. You will start hearing all these sounds coming in. Once you let them in, you’ve already done the first and most critical thing, you’ve honored that information by including it. And by doing that you’ve actually changed the world. It’s nothing mystical, but you’ve redefined the world for yourself. 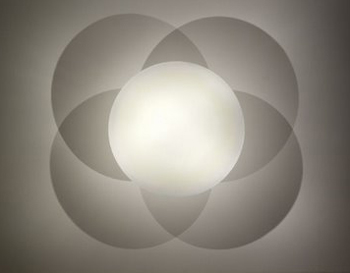 Irwin (and many other contemporary artists) have chosen not to make tangible art objects, as much as create installations and environments. It is most interesting … that some artists are working with the intangible ‘material’ of light, rather than paint or bronze. This expands the notion of what constitutes art, and so expands the possibilities of art. Light is so powerful in our lives, and its expressive potential is great. It also has a healing reputation – it is the province of the divine, however the divine may be conceived.

One of the first of Irwin’s efforts were his disc paintings, circular, convex aluminum discs, sprayed with a matte acrylic paint and mounted on a concealed tubular arm, 20 inches forward from the wall, which sought to avoid the dilemma of “the edge” of the painting, by means of artificial light (four incandescent lamps of equal intensity). The perceptual ambiguities in these pieces caused viewers to question what they were actually seeing, and to consider the nature of perception itself; the act of perception itself became the subject of his work. 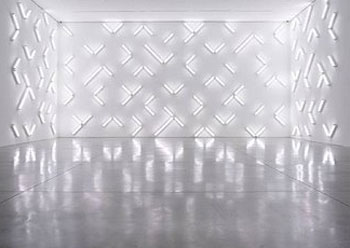 I embarked on two years of painting those paintings, two lines on each canvas, and at the end of two years there were ten of them. So I painted a total of twenty lines over a period of two years of very, very intense activity. I mean, I essentially spent twelve and fifteen hours a day in the studio, seven days a week. In fact I had no separation between by studio life and my outside life. There was no separation between me and those paintings … I put myself in that disciplined position, and one of the tools I used was boredom.

Boredom is a very good tool. Because whenever you play creative games, what you normally do is you bring to the situation all your aspirations, all your assumptions, all your ambitions – all your stuff. And then you pile it up on your painting, reading into the painting all the things you want it to be. I’m sure it’s the same with writing; you load it up with all your illusions about what it is. Boredom’s a great way to break that. You do the same thing over and over again until you’re bored stiff with it. Then all your illusions, aspirations, everything just drains off. And now what you see is what you get.

From seeing is forgetting the name of the thing one sees

seeing is forgetting the name of the thing one sees

The book is a primer of sorts on how to open yourself up
to aesthetic experience, how to be bowled over by beauty.
It’s about ‘trying to get people to perceive how they perceive.’