finding a truth for one’s work

I came to do what I do
by giving up all that I was trained to do.
Life drawing, easel painting, abstraction etc.

I chose to use the least number of choices
and have a reason for any choice I made. 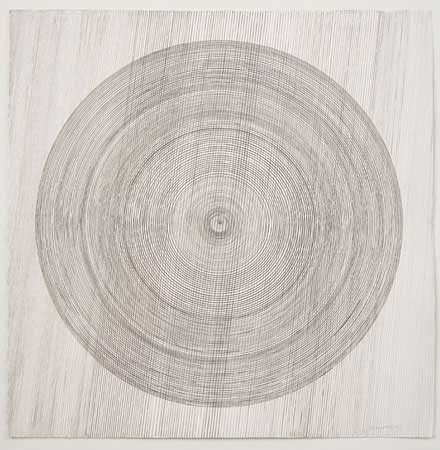 I was searching for a truth for my work.

I did not want to be influenced by any one else.

So closely following my nose
and asking questions of my last work
I came to do my next work.
The phrase I asked was,
“What would happen if I…?”

That simple question lead me down a strange path
and to a body of very personal work.

Diamond from the Canon Series 1982
Colored pencil on Mylar

As I see the world, it appears to have grown and evolved through a series of chances. My life and how it evolves appears to be determined by chance; but in reality, it is a structure directed and determined by my desires, both conscious and unconscious.

The theory behind my work is that if structure plays out long enough, it will appear to be chance. It won’t be chance, it will only appear to be chance. My life flows as all things in the universe flow, in a cyclical or circular manner. It is as in Lobachevskian geometry, the continuum meets itself in space.