There’s hardly a better window onto everyday life in Japan in the nineteenth century than the one Katsushika Hokusai opens in astonishing detail, and his studies in nature are pure nourishment for the soul.  This post is prompted by the current Hokusai exhibition at the NGV.  According to the media releases, 176 of Hokusai’s works will be shown, many for the first time in Australia.  (See gallery information below.)  The exhibition presents a rare opportunity to immerse ourselves once again in the genius of a brilliant Japanese artist and printmaker, who, on his deathbed at eighty-nine is reported to have exclaimed, “If I had another five years, I could have become a real painter.”

Not having seen the exhibition, I can’t claim the works I’m posting here are included.  (You can find wonderful preview images on the NGV website and in this gallery at the Guardian.)  I’ve gone my own way instead, choosing a few favourite studies from nature that beautifully demonstrate Hokusai’s depth of “seeing” and the scope of his awakened eye.

Although I have posted Roger Keyes’ wonderful poem here before it seems timely to give it another airing.  What more heart-full, wise advice could we possibly need – artists and human beings all – as we learn to simply “let life live” through us?

Hokusai says Look carefully.
He says pay attention, notice.
He says keep looking, stay curious.
He says there is no end to seeing.

He says Look Forward to getting old.
He says keep changing,
you just get more who you really are.
He says get stuck, accept it, repeat yourself
as long as it’s interesting.

He says everything is alive –
shells, buildings, people, fish, mountains, trees.
Wood is alive.
Water is alive.
Everything has its own life.
Everything lives inside us.
He says live with the world inside you. 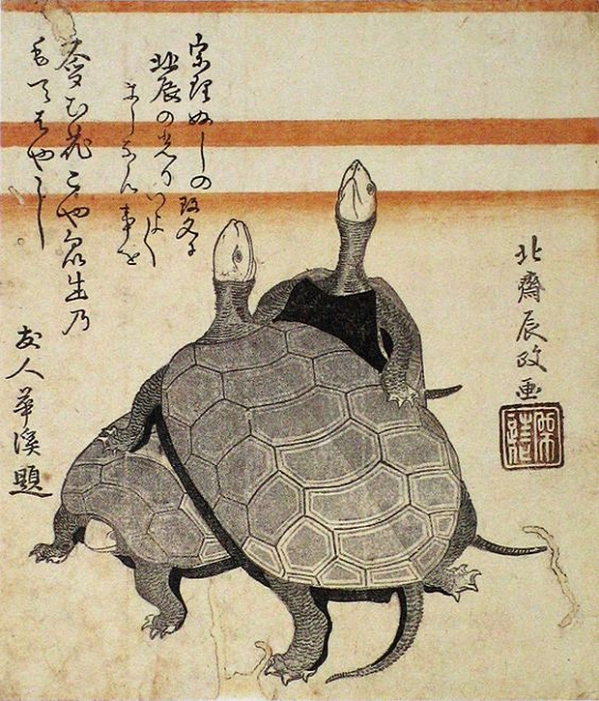 Katsushika Hokusai (1760 – 1849) is regarded as one of the most influential and creative minds in the history of Japanese art.  His unique social observations, innovative approach to design and mastery of the brush made him famous in Edo-period Japan and globally recognised within a decade of his death.

The self-described ‘Old man mad about drawing’ was known by at least thirty names during his lifetime and was renowned for his unconventional behaviour.  Despite his fame, Hokusai never attained financial success and his years of greatest artistic production were spent in poverty.  He travelled and moved his resting place and studio regularly, finding inspiration for his unique style through close observations of nature and interactions with ordinary people.

In 1909 the NGV purchased five works from Hokusai’s iconic Thirty-six Views of Mt Fuji series, including his most celebrated image The great wave off Kanagawa (The great wave), 1830–34; two works from his A Tour to the Waterfalls in Various Provinces series; and four other major works.  These astute acquisitions established a legacy of Japanese art in Australia that has now extended for more than one hundred years.

Hokusai features 176 works from the Japan Ukiyo-e Museum, Matsumoto, and the NGV Collection that encompass the artist’s remarkable seventy-year career.  For the first time in Australia, seven of Hokusai’s major series, including Thirty-six Views of Mt Fuji, 1830–34; A Tour to the Waterfalls in Various Provinces, c. 1832; Remarkable Views of Bridges in Various Provinces, c. 1834; Eight Views of the Ryūkyū Islands; and One Hundred Ghost Stories, c. 1831, are on display, as well as selected works representing his great passion for the classical subjects of birds and flowers and historical poetry.  A selection of rare prints and paintings that show the stylistic and thematic changes of Hokusai’s formative years, as well as three sets of illustrated books that highlight the artist’s masterful and compositionally innovative book illustrations, including the complete set of fifteen volumes of Hokusai Manga, compete this comprehensive insight into the life and times of this major figure.

Source – National Gallery of Victoria
See the site’s Gallery of Themes for a feast of Hokusai’s work.
Showing until 15 October, 20017 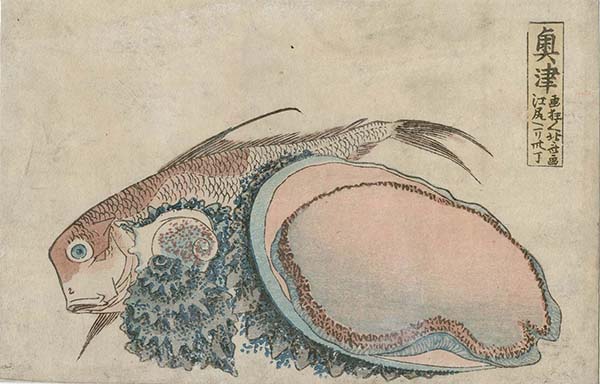 10 thoughts on “there is no end to seeing”