Ron C Moss is a visual artist and poet living in Tasmania, an island of rugged wilderness and solitary beaches.  Tasmania’s natural wonders inspire his art, poetry and his continuing journey into the haiku arts.

“Submit to nature, return to nature,” wrote the seventeenth-century Japanese haiku-master Matsuo Bashō, thus capturing the beauty and simplicity of the haiku—a seventeen-syllable poem traditionally depicting a fleeting moment of a given season. The same can be said of the haiku’s more visual cousin, the haiga, which unites a haiku poem, written in calligraphy, with a simple painting.

In Bashō’s time, ‘haiga’ meant a brushed ink drawing combined with one of his single poems handwritten as part of the picture. In our day and age, haiga can be watercolor paintings, photographs or collages with a poem of any genre that is integrated into the composition.  Sometimes the poem is handwritten or it can be computer generated, depending on the artist’s taste. 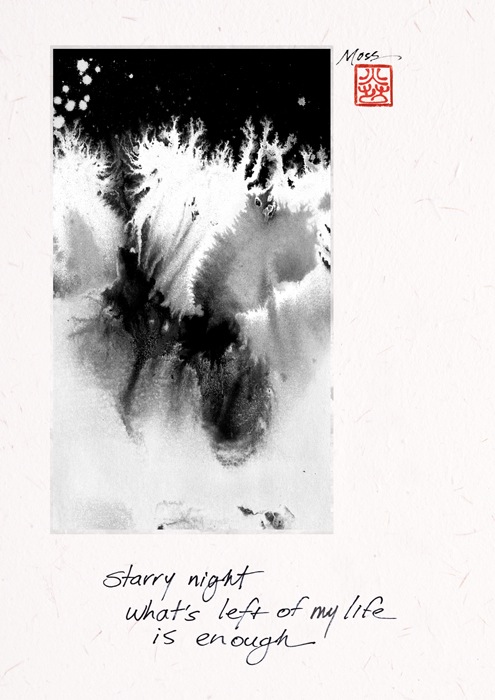 Starry night
what’s left of my life
is enough

I consider myself a student of the Zen arts, which have fascinated me from an early age.  I enjoy the distilled conciseness of haiku, the exploration of art and mixed media, and sometimes I like to combine the two, as in the ancient tradition of haiga.

I try to bring a sense of contemplation into my work.  Moments of stillness are important in our very busy lives and my path is to practice the way of art and haiku poetry.

Related posts about haiga and haiku:

3 thoughts on “submit to nature, return to nature”